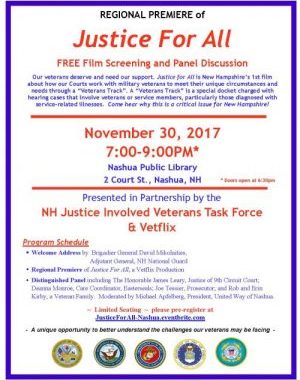 Back in October I wrote in this column about the “Veterans Court.” At the time I indicated that “The Nashua Veterans Court has been operating since 2014 and began as an outgrowth of our Mental Health Court. The basic premise is really quite simple, but also profound: combat veterans, because of their experiences, are a unique grouping in our society, with their own particular needs, and a specialized court which provides access to treatment, accountability, and structure will invariably be more effective than traditional incarceration and punishment. Because of what they have gone through in their service, half of veterans returning from overseas combat deployment suffer with various mental health issues. One in six will struggle with a substance use disorder; and one in five will suffer with post-traumatic stress disorder (PTSD). These rates far exceed those of other groups and the population at large, so therefore it also makes sense to think differently about working with veterans who might end up breaking the law and being convicted of a crime. In fact, there are approximately 700,000 veterans in the judicial system today. That’s exactly where the Veterans Court comes in.”

As a follow-up to that piece, this past month we held a community conversation at the Nashua Public Library which was called “Justice for All.” This program included the screening of a film with the same name and then a follow-up panel discussion of experts with firsthand experience in the field of veterans involved justice. The film is produced by Dan Marcek of Vetflix and includes interviews with veterans, their families, mental health counselors, prosecutors, and judges, all involved with the veterans court. In preparation for the panel, I also had the honor of going to a meeting of the New Hampshire Justice Involved Veterans Task Force, which meets at the Department of Health and Human Services. This group has been actively working for several years to identify the unique needs of veterans who get on the wrong side of the law. The Task Force is an incredible team which includes law enforcement, the VA, the military, the courts, and mental health professionals. Their sole purpose is to find productive solutions to help our veterans regain their productive lives. After all, if we believe that people deserve a second chance, then who is more deserving than a veteran who has put themselves purposefully in harm’s way to protect our country and our freedoms?

After the film, the panel discussion which ensued – with an audience of over 60 in attendance – was remarkably interactive. As the moderator, I was concerned about how much audience engagement there would be, but after a couple of questions from me to get the conversation going, things took off. The Honorable James Leary, who is the judge overseeing the veterans court in Nashua, and Joe Tessier, who is the prosecutor (and a veteran himself) shared how the veteran’s court actually works. What sort of approaches are effective was an interesting topic, especially the extent to which the judge and prosecutor get involved in the court participants individual cases. Glenn Kazan from Easter Seals shared how the counseling professionals and VA personnel play a key role in supporting court participants through the process. Most engaging of all, and in my opinion, the stars of the show were Erin and Rob Kirby. Rob is a combat veteran who served in Afghanistan and Erin is his wife. When Rob returned from his deployment, he found himself struggling with post-traumatic stress, but being a vet means being proud and can lead to a reluctance to seek treatment, so instead of getting help, Rob self-medicated with alcohol and quickly found himself in trouble with the law. The final straw was a confrontation which took place in Rob’s basement… muzzle of his rifle in his mouth, ready to kill himself. Erin took the kids outside to safety and called 911, and when the police arrived they were able to taze Rob and detain him. That’s when Rob finally entered into the court system. Erin describes their situation as a miraculous series of lucky circumstances which ended up with them in front of Judge Leary. Today Rob owns his own construction firm and is a loving and supportive father and husband. But it could have gone very differently. He could be sitting in prison, or worse, dead. This is the whole reason why we go out of our way to treat vets with a unique approach.

I would like to thank the members of the JIV Task force for the work they do to make our community stronger and Judge Leary, Jo Moncher from DHHS, and Dan Marcek from Vetflix for asking me to get involved in the discussion. Most of all, I would like to thank Rob and Erin for having the courage to share their stories and to do what they can to help reduce stigma. They are making a difference and leading by example. At the end of the day, this is truly what we mean when we say that Great Things Happen When We LIVE UNITED.

Nonprofits to benefit from dining program