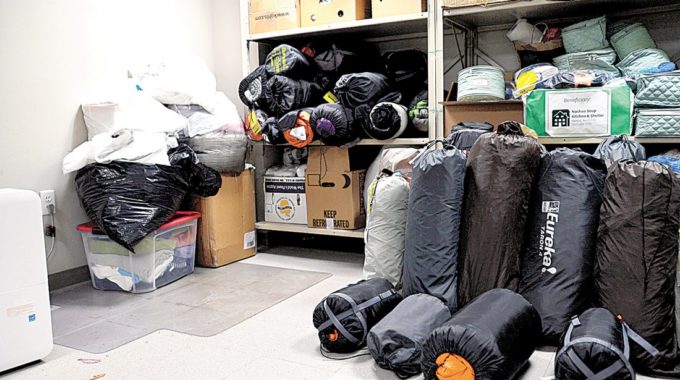 As unemployment claims skyrocket across the state, the Nashua Soup Kitchen & Shelter is preparing for what could result in an increased need for shelter space.

While space is limited, NSK&S secured camping gear Friday morning from United Way of Greater Nashua that will be used in the event shelter space has reached capacity, and overflow space is needed. The idea is that if a situation arises in the coming weeks where additional space is needed, tents will be set up in the parking lot of their Ash Street shelter to accommodate people.

“The soup kitchen is preparing for overflow for homeless people who might need to be quarantined or separated, and they’re out of space, so they put out an ask for tents and sleeping bags,” said Mike Apfelberg, president of the United Way of Greater Nashua.

Apfelberg dropped off a number of donated tents, sleeping bags and pads at the shelter Friday.

NSK&S Executive Director Michael Reinke said the Ash Street shelter has a big parking lot where tents can be set up for people in need as a potential overflow space. This could also be used in the case where someone says they need to be away from others because of possible coronavirus disease exposure, or if someone expresses concerns about being in the shelter for fear of getting ill. Reinke said last week NSK&S faced a situation where they essentially needed overflow space, and so they put out an ask to the United Way.

In the meantime, the shelter also has instituted safety measures to help keep its clients safe, such as putting curtains around the bunk beds. Also, those sleeping on the bunk beds are now sleeping opposite one another, so if someone on the top bunk is sleeping with their head to the north, the person on the bottom bunk will sleep with their head to the south. This is being done to keep distance between people’s breathing, even if they are close in terms of where they are sleeping. Showers also are still being offered at the shelter, but one thing NSK&S is no longer doing is allowing them to take a shower at their 2 Quincy St. facility.

“We’re really trying to keep this building (Quincy Street) limited as much as possible to the general public, just so that it continues to be a safe space to provide food,” Reinke said.

The facility still is offering breakfast, although the time has changed. The new hours for breakfast are 8:30-9:30 a.m. This change comes as a result of NSK&S trying to keep big volunteer crews out, meaning only one or two volunteers are working, with the rest being staff. Reinke said in terms of staffing time, this change is a lot better. In addition, starting next week, the pantry is going to be open 1-3 p.m., and dinner will be served from 4-6 p.m.. During dinner hours, people will be allowed to use their bathroom, because staff can clean afterward.

Citing the millions of Americans across the country who have recently filed for unemployment, Reinke is looking ahead at what could become an increased demand for services. In the meantime, NSK&S is in need of feminine hygiene products, as well as toilet paper.

“I’m anticipating that in a couple of weeks we’re going to have a lot more people saying, ‘I need some help of some kind,’” Reinke said.

Moreover, while the shelter takes steps toward addressing the impact of COVID-19, the city also is having conversations about how they can help.

Nashua Mayor Jim Donchess said the first issue with the homeless population the city is looking at is the bathroom issue. City officials have a conference call every day, seven days a week, on all the issues that stem from the outbreak.

“The first issue we’re trying to deal with is bathrooms,” Donchess said. “We’re going to put out porta-potties, assuming we can get them.”

Donchess said those porta-potties need to be ordered through the state, and that there is an order process to get them. Donchess also said the city is submitting an order to try to get porta-potties as soon as possible.

A couple of them will be set up near the Nashua Public Library, and Donchess said there will probably be a couple set up near the entrance to Mine Falls Park, out in the western end of the millyard.

The mayor said public health officials are considering what steps should be taken with respect to the homeless population, which was one of the subjects discussed during Friday’s conference call. In addition, Donchess added that public health has some concerns about gathering people together at one site, not only because of COVID-19, but in addition, there could be other public health issues, including the opioid crisis and hepatitis, among others.

“Public health are still working on that issue, but again, bringing people together at a single site could create more problems than it solves,” Donchess said.

This article was originally published in the Nashua Telegraph by ADAM URQUHART.

Each of us is confronting the Coronavirus in different ways. Some are self-quarantining, practicing social…

Parents, could your student use help catching up this summer? Learn United is a FREE…

Drug court: A program which is changing lives in our community