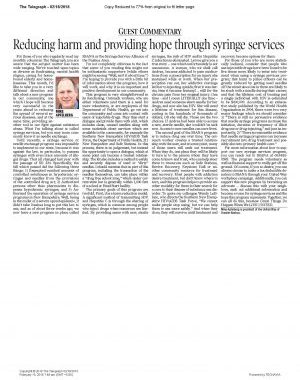 For those of you who regularly read my monthly column in the Telegraph, you are aware that the subject matter has been wide ranging. We’ve touched upon topics as diverse as fundraising, mental health stigma, caring for homebound elderly, and homelessness. This month, I’d like to take you in a very different direction and talk about a new program in our community, one which I hope will become very successful in the years ahead in reducing the spread of several serious diseases, and at the same time providing another tool in our fight against substance abuse. What I’m talking about is called syringe services, but you may more commonly know it as needle exchange.

Until recently, a syringe service or needle exchange program was impossible to implement in our state, because it was against the law, in particular, to possess syringes with even trace amounts of illegal drugs. That all changed last year with the passage of SB 234. Specifically, the bill which passed did the following three things: 1) Exempted residual amounts of controlled substances in hypodermic syringes and needles from the provisions of the controlled drug act; 2) Authorized persons other than pharmacists to dispense hypodermic syringes; and 3) Authorized the operation of syringe service programs in New Hampshire. Well, being in the midst of a severe opioid epidemic, it didn’t take Nashua long to put this law to use, and as of about 3 weeks ago, we now have a new program in place called “SSANA” or the “Syringe Service Alliance of the Nashua Area.”

I’m not completely oblivious to the fact that some of you reading this might not be enthusiastic supporters (while others might be saying “Well, isn’t it about time.”). I’m hoping to provide you with a little bit of information about the program, how it will work, and why it is an important and positive development in our community.

This program is very straightforward in its functioning. Outreach workers, who are either volunteers (and there is a need for more volunteers), or are employees of the Department of Public Health, go out into the community and come into contact with users of injectable drugs. They then start a dialogue and provide them with a kit, which includes clean, unused needles along with some materials about services which are available in the community, for example the Southern NH HIV/AIDS Task Force, the Department of Public Health, 211 New Hampshire, and Safe Stations. In this process, there is no judgement, but instead the opportunity to open a dialogue, which at some point can become a trusted relationship. The kit also includes a method to safely and securely dispose of used or “dirty” needles. I should mention that no part of this program, including the transaction of the needles themselves, can take place within a “drug free school zone,” which under current state law is generally within 1,000 feet of a school or Head Start facility.

The primary goals of this program are twofold. First, it is a harm reduction model. A significant method of transmitting HIV and Hepatitis C is through the sharing of syringes, which is common among people who inject drugs when resources are limited. By providing users with new, sterile syringes, the risk of HIV and/or Hepatitis C infection is eliminated. Let me give you a true story… one which unfortunately is not uncommon. A woman, who we shall call Andrea, became addicted to pain medications from a prescription for an injury she sustained while at work. When her prescription ran out, her addictive cravings led her to injecting opioids; first it was heroin, then it became fentanyl… still for the chronic pain from her original injury. One time – and I mean LITERALLY one time – Andrea used someone else’s needle for her drugs, and now she has HIV. She will need a lifetime of treatment for this disease, costing in the hundreds of thousands of dollars, OR she will die. Those are the two choices. If Andrea had been able to access a new, sterile needle, she wouldn’t be sick now. Access to new needles can save lives.

The second goal of the SSANA program is to reduce drug use over time. The outreach worker creates a trusted relationship with the user, and at some point, many of those users will seek out treatment. When they do, one place they will be likely to turn is to the person whom they have come to know and trust, who can help steer them to resources such as Safe Stations, Revive Recovery, Keystone Hall, or another community resource for treatment and recovery. Most people with addiction desire treatment, but don’t know where to turn, and this program helps to provide another modality for them in their search for a cure to their disease of substance use disorder. To quote my colleague Wendy LeBlanc, who directs the Southern NH HIV/AIDS Task Force, “We cannot make people stop using, but we can help them to use more safely.” And when they do so, they will survive until treatment and recovery become options for them.

For those of you who are more statistically inclined, consider that people who use injectable drugs have been found to be 5 times more likely to enter into treatment when using a syringe services program; that harm to police officers can be greatly reduced by getting used needles off the street since 1 in 3 are likely to be stuck with a needle during their career; and that the lifetime cost of treating just a single individual with HIV is estimated to be $400,000! According to an exhaustive study published by the World Health Organization in 2004, there were two very major findings which we should consider: 1) “There is still no persuasive evidence that needle syringe programs increase the initiation, duration or frequency of illicit drug use or drug injecting,” and just as importantly, 2) “There is reasonable evidence that needle syringe programs can increase recruitment into drug treatment and possibly also into primary health care.”

For more information about how to support our new syringe services program, you can reach out to SSANA at 603-816-0595. The program needs volunteers as well as financial support to really get off the ground. Of course, if you so desire, you can always choose to make a tax deductible donation to SSANA through your United Way workplace campaign. Additionally, you can support this new program by becoming an advocate… discuss this with your neighbors, seek out additional information, and become a voice for syringe services and the hope this program represents. Together we can all do this, because Great Things Do Happen When We LIVE UNITED.

‘Spring’ into action at United Way!

Dare I say it… spring is here! The snowbanks are melted, the forsythia is starting…